In the Avengers series, Tony Stark wears a suit of powered armor to become the popular hero Iron Man. Inside that suit is a cluster of sensors. Under control of the A.I. known as J.A.R.V.I.S., the sensors can be used to help Stark see distant objects out of range of his normal sight, or to detect missiles approaching from behind. The suit also gets a quantitative and objective understanding of Stark’s physical and mental condition by monitoring his heartbeat, blood pressure, and other information. Humans have sensors too! Our eyes, ears, nose, and other organs give us information about the environment around us. The camera and radar systems on Iron Man’s suit can be described as extensions of those senses. Unfortunately, humans aren’t able to get as much detail about the pulse*1 and other internal information as Iron Man’s suit can; we only really know when we have palpitations*2.
Let’s think of another example. When a baseball player throws a ball, he or she can follow the path the ball takes and guess how fast it is going. However, the player only gets a subjective understanding of the movement of the muscles and bone in the arm when throwing. Coaches have to watch their players when they throw, and analyze their movement to give them advice on improving their technique.
Experienced, skilled coaches are like J.A.R.V.I.S. and the Iron Man suit. The problem is that Stark built by those systems using his extraordinary intelligence and vast financial resources; not everyone has access to the kind of support provided by coaches. To solve that problem, Associate Professor Guillaume Lopez of Aoyama Gakuin University has developed a system that uses a smartwatch to analyze a pitcher’s technique to improve throwing speed. 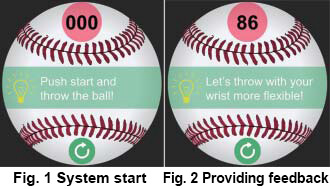 To use the system, Lopez installs a program he developed on a smartwatch. The program captures numerical data using the accelerometers embedded in the watch, and provides advice on ways to improve. Figure 1 shows the screen when the system is launched, and Figure 2 shows the type of feedback that is provided after a throw. The program can capture three types of data: forward-backward movement, left-right movement, and twisting movement. It compares the numbers acquired during a pitch with the numbers for an ideal pitch, and then it displays advice aimed at bringing the pitcher’s throw closer to those ideal numbers. Lopez’s goal is to create a system that provides on-site feedback using a device that anyone can buy. In other words, he is developing a wearable*3 system people can use to improve their skills on their own.