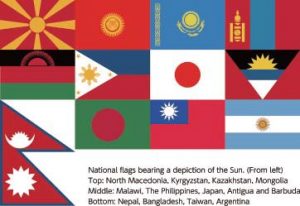 Many national flags feature animals and other elements from nature in their designs. The red circle in the middle of the Japanese flag symbolizes the Sun. Sun symbols appear in all the flags we see here, but in many of them, the Sun is depicted in yellow, and in some flags, it is depicted in white. Now, the red used for the Sun depictions in the flags of Malawi and Bangladesh is meant to symbolize the blood spilled in their fights for independence from the United Kingdom. The Sun is not always colored red throughout the world. This sort of difference in visual interpretation has a profound influence on communication between peoples from different cultures.
The Japanese term o-hanami or “flower viewing” is always a reference to the cherry blossoms that bloom in spring, but that is not necessarily true for visitors from other countries. For example, plum and peony blossoms hold great meaning for people from China. The national flower in both India and Sri Lanka is the lotus, while in Turkey, it is the tulip. The park along the moat at the Imperial Palace in Tokyo has olive trees presented by the Israeli ambassador. If people don’t know that they are the national trees of Israel, they won’t understand the significance of the gift. When two people from different cultures talk to each other, they can learn what meaning each person puts into words and objects by understanding the cultures in which each person was raised.
Word meaning is dependent on the relationship between the people who are talking―even if they are both Japanese. For example, let’s think about a situation in which Person A asks, “Did you sleep well?” and Person B answers, “I did.” Depending on the relationship between A and B, the meaning of this quick exchange can be different. Perhaps the two are friends and the recent hot weather has made A worry that B isn’t getting enough sleep because B doesn’t use air conditioning. Or perhaps A is a doctor and B is a patient undergoing medical treatment for insomnia, and the doctor wants to know whether the medicine A prescribed is effective. The conversations we have with other people are upon our shared history and the context of our relationships.
Toyo Eiwa University professor Yuko Takeshita studies communication between Japanese people and those from other cultural backgrounds. The origin of the word “communication” is in the Latin word communicare , which means “to share.” It’s about sharing and recognizing each other’s culture. The idea that people can be ambiguous when communicating in Japanese comes from the implicit understanding that individuals in Japanese society share the same cultural background. Takeshita teaches her students not to base their communication on that sort of ambiguity, but to recognize and think up ways of bridging communication gaps. This is an essential skill desperately needed for Japanese people.